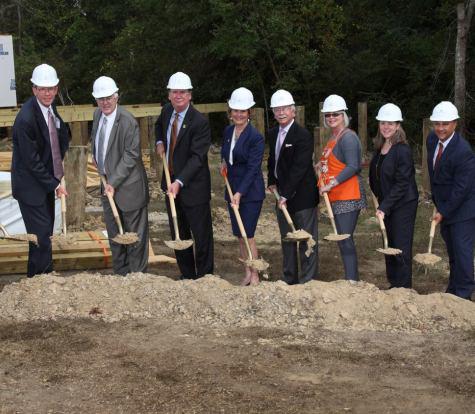 The Cottages at Mile Branch is a single-family development in Covington, La., offering 25 two, three and four-bedroom single-family homes on individual lots. These lease-to-own homes will complete an existing planned neighborhood development already comprised of The Groves at Mile Branch (a 94-unit apartment facility) and 10 existing single-family homes. The homes will be restricted to households earning up to 60 percent of the area median income, with 13 of the 25 homes set aside for veterans and their families. Four of the 25 homes will be compliant with the Americans with Disabilities Act and able to accommodate the needs of physically-injured veterans. In addition to living in an energy-efficient home in a beautiful neighborhood, residents will belong to a neighborhood association and have access to a community park, recreation facilities, computer lab and even top-ranked public education in nearby schools.

"Providing affordable workforce housing, especially to veterans in our community, helps us fulfill our mission to serve the most vulnerable in our communities," says James LeBlanc, president and CEO of Volunteers of America Greater New Orleans, adding, "The Cottages at Mile Branch represent the very best of what a community can be: affordable, convenient and designed with families in mind."

Since beginning its partnership with Volunteers of America in 2011, The Home Depot Foundation has given nearly $11.3 million to the organization to improve housing for homeless veterans and their families. The partnership between the two organizations has funded more than 80 veterans' housing projects, providing over 3,000 units for veterans, including almost 500 units specifically for women veterans and their families, in Alabama, California, Colorado, Delaware, Florida, Illinois, Indiana, Kentucky, Louisiana, Maine, Massachusetts, Michigan, New Jersey, New York, Ohio, Pennsylvania, South Dakota, Texas and Washington. In addition to the grants, Team Depot, The Home Depot's associate-led volunteer force, has completed countless projects to improve Volunteers of America's veteran housing facilities.

The partnership with Volunteers of America is part of The Home Depot's nationwide commitment to improving the homes and lives of U.S. military veterans and their families. In the last five years, Team Depot, the company's associate-led volunteer force, has improved more than 26,700 homes for veterans and has committed to investing a quarter of a billion dollars in veteran-related causes by 2020.

About Volunteers of America

Volunteers of America is a national, nonprofit, faith-based organization dedicated to helping those in need live healthy, safe and productive lives. Since 1896, our ministry of service has supported and empowered America's most vulnerable groups, including veterans, seniors, people with disabilities, at-risk youth, men and women returning from prison, homeless individuals and families, those recovering from addictions and many others. Through hundreds of human service programs, including housing and health care, Volunteers of America helps almost 2 million people in over 400 communities. Our work touches the mind, body, heart and ultimately the spirit of those we serve, integrating our deep compassion with highly effective programs and services.

About Giving Back at The Home Depot

Since the first The Home Depot store opened in 1979, giving back has been a core value for the Company and a passion for its associates. Today, The Home Depot, in partnership with The Home Depot Foundation, focuses its philanthropic efforts on improving the homes and lives of U.S. military veterans and their families and aiding communities affected by natural disasters. Through Team Depot, the Company's associate-led volunteer force, thousands of associates dedicate their time and talents to these efforts in the communities where they live and work.

Since 2011, The Home Depot Foundation has invested more than $1160 million to provide safe housing to veterans, and along with the help of Team Depot volunteers, has improved more than 26,700 homes for veterans. To learn more and see Team Depot in action, visit www.homedepot.com/teamdepot.